This project is still under construction.
中文介绍 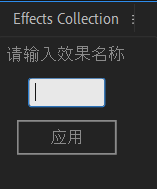 Input the desired effect name and generate it with one click.

Effects Collection is an After Effects script that allows rapid creation of various effects typically used in MAD/AMV. Effects are implemented based on various tutorials on the Internet. It is created in the hope of speeding up the creation process, while preserving and collecting useful methods/tricks by provding their concrete implementations. Although the plan is to include a growing amount of effects, it may be subject to changes due to author’s time and energy restriction and interest in other topics.

This script does not pull out important parameters for quick adjustment, but instead expects the users to understand the corresponding effects by looking at the attached tutorials in wiki, and adapt the effects to their own needs with free adjustments.